Excellent! The random number generator has decided that I should write about one of the most important games from my childhood. 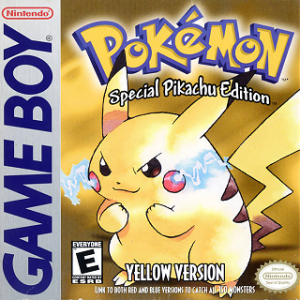 I would consider Pokémon Yellow to be my first video game. It’s true that I played computer games before I got Yellow, some of which are even on my list of beaten games (See JumpStart 3rd Grade), but Yellow was the first game I ever owned for a console, and back then there was a bigger distinction between computer games and video games than there is now.

I was a big fan of Pokémon before I even owned any of the games. I watched kids trading Pokémon cards on the bus before they were banned, I watched my friend play Blue Version on the bus every day, I saw the movies in theaters when they came out, and I watched the TV show if it happened to be on. The only reason I didn’t own any Pokémon games was that my parents were resistant to letting me get into video games. One day, however, when I was almost 8 years old, my Mom asked me if I wanted to get a GameBoy Color, and I was totally on board with that. I did the math, and though I’m not 100% on it, I’m pretty sure it was August of the year 2000, and I’m guessing that Toys R Us was having a sale. My mom decided to get me a GameBoy so that I would make friends easier with people who had the same interests as mine (it worked).

When I went into the store, I chose the lime green GameBoy Color, and though I had intended to decide between Pokémon Red or Blue, when I got there, I noticed that a third Pokémon game had come out staring Pikachu. I knew that it was the game for me, and so I named my character ASH and the rest is history.

I was super excited to have a Pokémon game of my own, and also to be able to obtain badges faster than the real Ash did (I previously noticed that his progress was so slow, and it was bothering me).  However, try as I might, I wasn’t very smart back then and after getting to Vermillion City I lost Pikachu in the PC System, either because I didn’t know what Deposit meant or I accidentally released him. I didn’t think to turn my game off to return to the last save and I didn’t want to wait for Jonah’s advice the next day, so I started a new game with a vengeance. After all, even I knew that two badges wasn’t a lot to lose.

The second time I got to the Battle with Brock, I somehow had a lot of trouble trying to beat him. I determined that this was because Pikachu only knew electric type moves and they don’t affect ground type Pokémon like Geodude or Onix. To address this, when my Dad had to go on an errand, I stayed in the car and trained my Pikachu in the patch of grass south of Pewter City for about an hour. It only took an hour to teach Pikachu the move Slam, and in the process, Pikachu got to level 20. That one hour of training made the rest of the game a breeze. I don’t exactly remember my pace, but I think that I remember watching the Macy’s Thanksgiving Day Parade three months later while making my way through Victory Road for the first time. The next year, a Pikachu balloon would be added to the parade, but I know where Pikachu was during the 2000 parade. He was helping me beat the game.

So eventually I did beat the game. It must have been hard work, but I don’t really remember. I know I eventually got Pikachu to Level 100 and that it felt like a pretty big deal. Having recently done the math (considering the US release dates of the games and movies), it may be that I actually bought Pokémon Gold Version before finishing Pokémon Yellow, but that fact must have previously been erased from my memory (The passage of time is strange when you’re young). I wasn’t quite good enough to catch all the Pokémon back then, but that would eventually change.

In August of 2009, I returned to Yellow Version, and brought along a recording device. Some time this year I’ll be posting my abridged playthrough of filling my Pokédex in Yellow with all 151 Pokémon. I also added a feature for people who own Pokédex 3D Pro for the 3DS. Here’s the playlist of The Yellow Quest!